A negative reading for the advance estimate of US GDP growth in q2 surprised private forecasters, contributing to recession talks. By using a standard forecasting model, we show that, when accounting for the high level of CPI inflation and tight labor markets, an incoming recession appeared to be extremely likely even one month ago, both in the United States and the United Kingdom.

The second quarter of 2022 has witnessed a sharp deterioration in the global business cycle momentum as global trade remains stifled by persistent supply bottlenecks, commodity prices are bolstered by the war in Ukraine and high inflation keeps eroding consumer purchasing power. Meanwhile financial conditions have tightened considerably, as central banks reacted aggressively to stubborn inflationary pressures. Against this backdrop, the US economy has recorded a second consecutive negative GDP print, after the fall of economic activity in Q1. The prospects for other advanced economies appear equally worrisome, especially for energy importers, whose terms of trade have rapidly deteriorated following the invasion of Ukraine. Forecasters have factored in these headwinds and have marked down their expectations for global growth in 2022 and 2023 (see, e.g., IMF) and the question seems to be when rather than if a recession is going to occur: the search of the word “recession” on Google has flared up since last March (Figure 1). 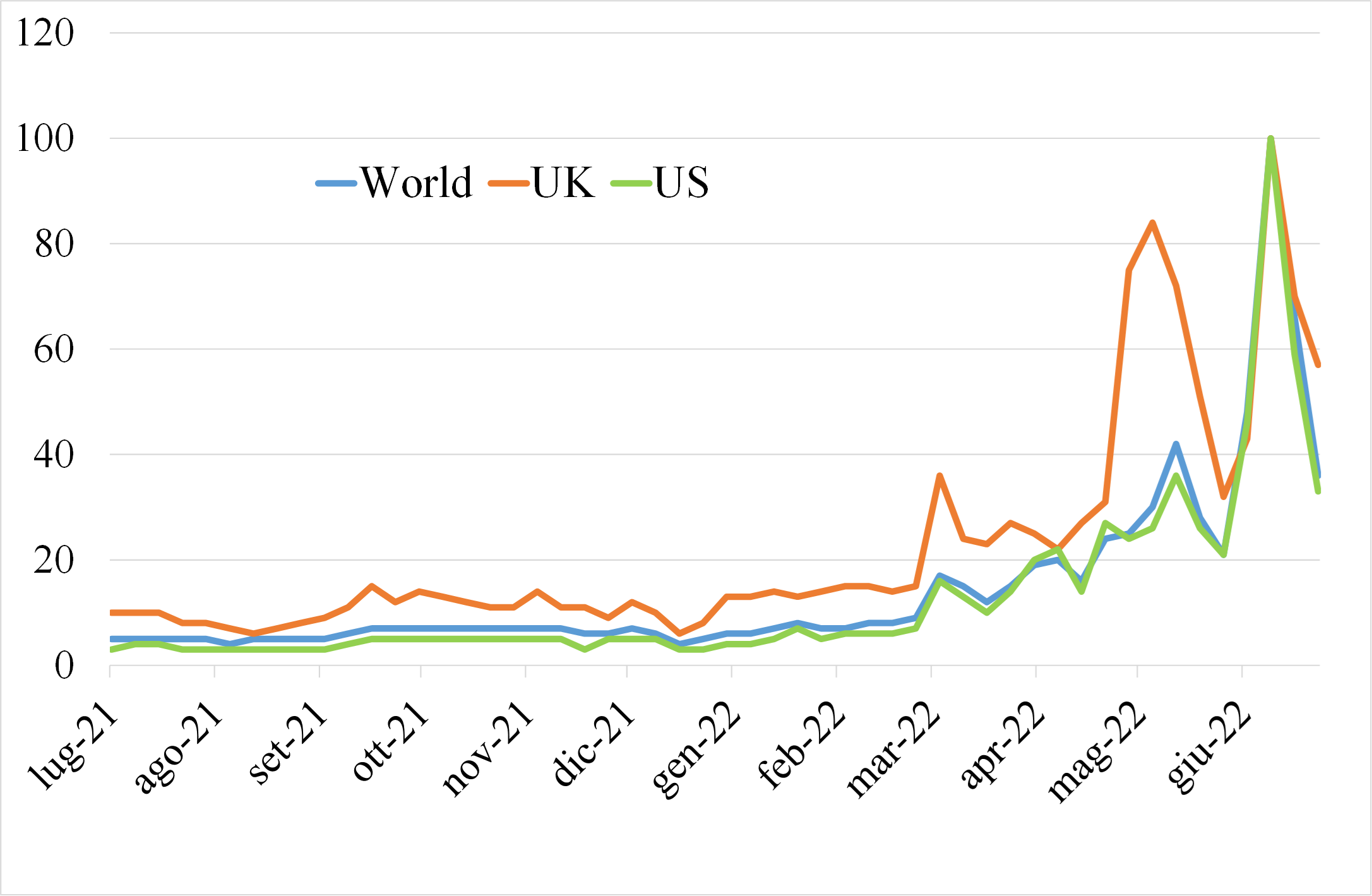 (number of hits ranked between 0 and 100 over the considered period). Source: Google trends

In recent work (Natoli and Venditti, 2022), we contribute to this debate by jointly evaluating the relevance of financial and macroeconomic factors in anticipating recessions in the United States and in the United Kingdom since the late 1990s. In our analysis we rely on the standard probit forecasting framework pioneered by Estrella and Hardouvelis (1991),

where the dependent variable is a dummy equal to one (zero) if the economy is (is not) in a recession at time t + h, h is the forecast horizon, x is the set of regressors, F(.) is the standard normal cumulative distribution function and  is a normally distributed error.

The standard specification in the literature, which we take as a baseline, considers the slope of the government bond yield curve – the difference between the 10-year vs. 3-month yield – as a unique predictor. The ability of this minimalistic model to predict recessions, however, has been recently questioned in the literature (Karnizova and Li, 2014; Ercolani and Natoli, 2020; Kiley, 2022, among others). We therefore start by adding to the baseline specification indicators of market stress – financial conditions and stock market volatility, according to the view that the slope of the yield curve alone might be unable to fully capture deteriorating financing conditions leading to a crisis.  A Financial Condition Index (FCI) is constructed as an unweighted average of 10-year yields, monthly stock returns and corporate bond yield spreads, in the spirit of Arrigoni et al. (2022), while stock market volatility is captured by the VIX. In a third specification we also add two variables summarizing the macroeconomic environment – CPI inflation and the unemployment rate. Figure 2 shows coefficient estimates for the US over different forecasting horizons (1 to 12). They confirm that financial indicators and macroeconomic conditions provide additional predicting power. In particular they show that periods of (i) flat yield curves (ii) tight financial conditions (iii) high financial market uncertainty (iv) high inflation and (v) low unemployment (broadly resembling the current economic environment) were likely to be followed by a recession. Estimates for the UK are very similar. 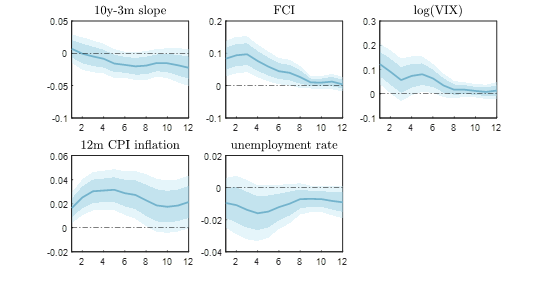 When specifications based on the slope of the yield curve are enriched by key financial and macroeconomic indicators, forecasting performance improves considerably and, in the current environment, the probability of an incoming recession jumps to values very close to 1. Figure 3 shows the time series of the predicted recession probability (6-month ahead) of the model that relies only on the slope of the yield curve (blue lines), of the intermediate specification that includes the VIX and FCI (green line) and of the full model that also introduces inflation and unemployment (red line). According to standard measures of fit, this last model is the one that performs best. All models are estimated with data going from January 1998 up to May 2022 – i.e., already available around mid-June. It turns out that, historically, financial conditions played a more important role than inflation and unemployment in predicting the recessions of the early 2000s; also, they were very tight before the pandemic shock that eventually toppled the global economy in 2020. In the case of the Great Recession in 2008 both financial and real factors played a role.  At the current juncture, on the other hand, the strongest recession signals are coming from record high inflation and tight labor markets, in line with what is found in Domash and Summers (2022). An interesting observation is that the sample period includes years of anchored inflation expectations and credible monetary policy: our results indicate that, even in such environment, an aggressive monetary response – sufficiently aggressive as to generate a recession – would be needed to tame inflation. All in all, our results indicate that, at the current juncture, a soft landing – engineering disinflation without provoking a recession – is very unlikely. The actual combination of hot labor markets, high inflation and tight financial conditions has been typically followed by a recession.

Note: economy-specific recession bands are based on the OECD recession indicators

This post written by Filippo Natoli and Fabrizio Venditti.