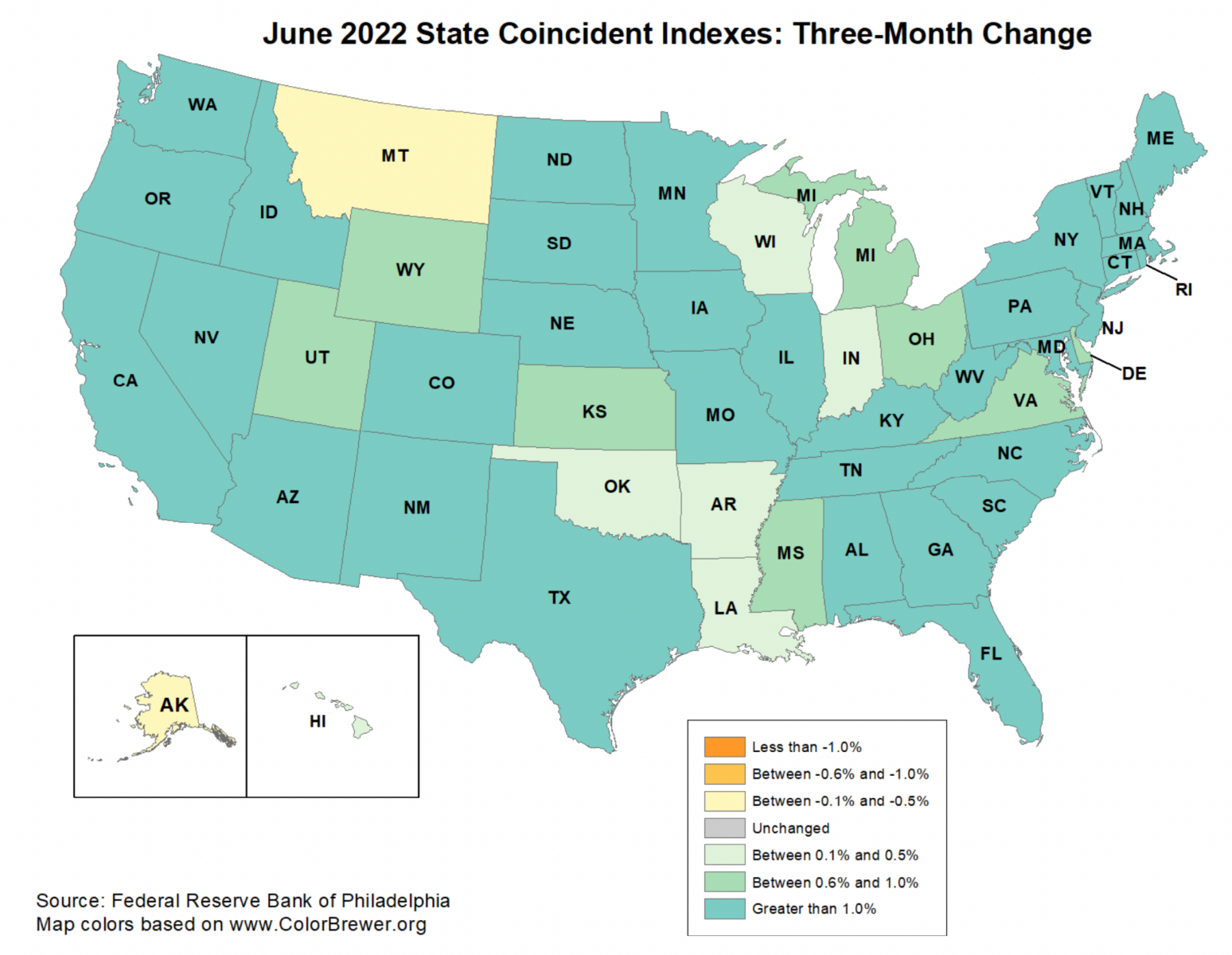 The last time we looked at the State Coincident Indicators Index, all 50 States were in an economic expansion over the trailing 3 months. The diffusion index = 100.

That is no longer the case today.

The FOMC meeting on May 3-4 raised rates by 50 basis points, which was followed by the 75 basis point increase at the June 14-15 FOMC meeting. Taking rates to the 1.50%-1.75% range had some bite, and we see the impact of this higher cost of credit combined with inflation impacting the economy.

“For the entire United States. The Philadelphia Fed’s U.S. index increased 0.9 percent over the past three months and 0.3 percent in June.” Hence, we are still expanding, but more slowly. If the trend continues, we will eventually slip into a recession.

Whether we are technically in a recession is less important than 1) Q2 Earnings; 2) Q3 economic activity 3) Q3 Earnings; 4) What the FOMC will do in response; 5) How much of this is already reflected in stock prices.

Regardless, for those of you who care about the question “Are we in a recession now?” consider the 6 elements that the NBER uses:

Michael Gapen and his economics team at Bank America Merrill Lynch looked at these 6 factors, observing:

“We do not think the National Bureau of Economic Research (NBER) will conclude that the economy was in recession at any stage in 1H ’22. Exhibit 1 [chart] shows that all six monthly indicators that the NBER uses to make its recession call have expanded since last December. While we may not be in a recession yet, economic momentum has clearly slowed. The GDP report showed final private domestic demand — consumer spending and fixed investment — was flat in 2Q after a 3.0% increase in 1Q.

Here these 6 factors are in chart form:

All 6 of these items are currently expanding, but at a slower rate than they were previously. Real personal Income and Real Wholesale + Retail Sales are where the slowdown is showing up the most.

For those of you at home playing the parlor game of “Are we in a recession or not?” I agreed with the BAML team’s assessment. The technical academic answer is we are not in a recession, but we are clearly slowing down economically. This is what the Federal Reserve has been aiming for.

The odds of avoiding a recession continue to fall with each rate increase.

1. Methodology: The Federal Reserve Bank of Philadelphia produces a monthly coincident index for each of the 50 states. The indexes are released a few days after the Bureau of Labor Statistics (BLS) releases the employment data for the states. The Bank issues a release each month describing recent trends in the state indexes, with special coverage of the three states in the Third District: Pennsylvania, New Jersey, and Delaware. The coincident indexes combine four state-level indicators to summarize current economic conditions in a single statistic. The four state-level variables in each coincident index are nonfarm payroll employment, average hours worked in manufacturing by production workers, the unemployment rate, and wage and salary disbursements deflated by the consumer price index (U.S. city average). The trend for each state’s index is set to the trend of its gross domestic product (GDP), so long-term growth in the state’s index matches long-term growth in its GDP.