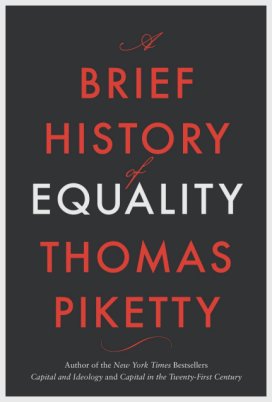 Economic inequalities have increased substantially across the world in the past three decades and have deepened during the COVID-19 pandemic. Thomas Piketty and his colleagues at the World Inequality Lab at the Paris School of Economics (PSE), France, have been at the forefront of tracking these changes, providing extremely useful analyses based on careful aggregation of national data on income and wealth inequality from a multitude of sources. They have shown that globally, inequality is now as entrenched as it was during the first part of the 20th century.

Despite this sobering assessment, A Brief History of Equality by Piketty, who is Professor at the École des Hautes Études en Sciences Sociales and the PSE, is, in many ways, an optimistic account of long-term trends in inequality and a possible blueprint for future egalitarian transformation. For a short book, it is also remarkably comprehensive, even encyclopaedic, displaying Piketty’s trademark ability to provide a long historical sweep along with an awareness of sociopolitical complexities in the determination of economic trends. The book distils some of the most important ideas eg, on the causes of trends in inequality in different periods and proposals eg, more progressive taxation and public welfare spending of his earlier influential volumes Capital in the Twenty-First Century and Capital and Ideology into concise and accessible language.

The early caveats Piketty sets out in the book have a conceptual importance that deserves much greater recognition. In a brief discussion on the various concerns with measuring monetary income, Piketty argues for using national income rather than gross domestic product as the relevant indicator, and suggests that the consumption of “natural capital” should also be deducted to arrive at national income. Yet almost immediately, he recognises the inadequacy of this approach: no matter what monetary value we choose to assign to the social costs of environmental damage, or carbon emissions, this does not accurately cover the damage done or the stakes involved. As Piketty warns, such measures maintain “the illusion that we can always counterbalance damage with money, provided we find the right ‘relative price’ to valorize the environment, which is a dangerous and false idea”. This stance is in opposition to many approaches taken by well meaning environmental economists and policy makers today.

Although Piketty emphasises the importance of environmental indicators taken on their own, and the inequalities associated with them, even these cannot suffice, because in addition to living in harmony with the Earth’s natural systems, human beings also need, for example, food, housing, clothing, and access to culture and justice. Thus, examining incomes, along with other variables, is also essential. A composite index can be less helpful than looking at individual variables separately, because forcing multidimensional reality into a unidimensional index necessarily loses important information. Similarly, synthetic measures of income inequality such as the Gini index or Theil index can be less illuminating than more obvious measures like the share of the top 10% in national income or wealth compared with the bottom half of the population. But in all this, Piketty reminds the reader that “socioeconomic indicators, like the historical series presented in this work and all statistics in general, are nothing more than imperfect, temporary and fragile constructions”. Nonetheless, high income countries (HICs) do show some remarkable trends in the distribution of property and income over several centuries in the data that Piketty cites. He identifies a long-term movement towards equality, a reduction of concentration of property, and therefore of socioeconomic power, resulting from a “profound re-equilibration of law in favour of those who are not property owners”, noting that property is essentially a set of socioeconomic rights that changes in different social and historical contexts. This shift was expressed most clearly in declining shares of the top 10% (and even top 1%) in shares of national income, and  to a much lesser extent in shares of total assets, and operated broadly in favour of what he calls the “patrimonial middle classes”. The past three decades, in which such inequalities increased once again, have only partly reversed this trend towards greater equality. And Piketty concludes: “on the one hand, there is a long-term movement toward equality…toward a lower concentration of property and thus of social and economic power; on the other hand, inequality nevertheless continues to be very high, even intolerable, and it is very difficult to be satisfied with such a situation or to claim that it would be in the interest of the majority”.

Piketty’s foray into the impact of colonialism is an important addition to the wider understanding of global inequality that was less evident in his earlier work. He notes how significant colonial exploitation was in the economic development of Europe, and refers to the continuing traces of that exploitation in determining economic possibilities in formerly colonised countries today. One limitation is that the research he cites is largely by authors based in HICs, overlooking scholars resident in countries that were colonised, such as Walter Rodney (How Europe Underdeveloped Africa, 1972), Celso Furtado (The Myth of Economic Development and the Future of the Third World, 1974), Amiya Bagchi (The Political Economy of Underdevelopment, 1982), and Utsa Patnaik and Prabhat Patnaik (Capital and Imperialism: Theory, History, and the Present, 2021), who have all made these points, arguably more effectively. This limitation is worth noting if only because knowledge itself can have colonial or neo-colonial constructions, and which authors are referenced is often a key part of that.

The essence of Piketty’s argument in A Brief History of Equality is that the long-run progress towards greater equality can be drawn upon to propose a strategy for feasible egalitarianism in the present and future. This tendency towards equality is not confined to incomes and assets, but is spread across various domains such as health and education. The “great redistribution” resulted from major increases in income tax rates that were used to finance public spending oriented to meet basic needs and the socioeconomic rights of citizens. He argues that the strategy must be to expand the welfare state, using progressive taxation, to transform capitalism: “The welfare state and progressive taxation, pushed to their logical conclusions, allow us to lay the foundations for a new form of democratic socialism: self-managing, decentralized, and based on the continual circulation of power and property.”

The importance of taxation in Piketty’s approach is well known, and he has been a valuable champion for taxing both incomes and wealth. Here he provides insightful examples that indicate how the shift to a more progressive fiscal framework can happen quite rapidly. For example, in the early part of the 20th century, Sweden moved in the space of a few decades from an extremely unequal system based on property ownership to a relatively egalitarian system, largely because of campaigns by workers that were implemented by the Social Democrats when they came to power.

Progressive taxation obviously operates to reduce the incomes of the rich, but most of all it enables the establishment and implementation of a welfare state that provides essential aspects of life (housing, nutrition, education, and health services). The crucial role of public activity then transcends capitalism, because when such services are provided by public authorities without basing them on commercial principles in anticipation of profits, this effectively creates a mixed economy. Importantly, Piketty finds that very high marginal tax rates do not act as disincentives for investment or innovation. For example, the highest tax rate between 1932 and 1980 was 81% in the USA and 89% in the UK, in a period when both economies experienced substantial growth and investment overall. In addition to redistribution, he argues that taxes on inheritance can serve the goal of “pre-distribution” that inhibit too much inter generational wealth transfer, once again suggesting that highly confiscatory rates of taxation on individuals have had immense historical success.

This strategy of combining progressive taxation with welfare state spending is certainly a major plank of any progressive agenda, and would operate to tame capitalism if not to totally domesticate it. But is it sufficient to address the failings of global capitalism, particularly for the less rich and formerly colonised countries? Piketty is as aware of the need to decolonise and even pay reparations for past extraction, as he is of how intersecting inequities affect the way= capitalism plays out. But this is precisely why, in addition to the fiscal policies that he puts so much emphasis on, it is necessary to bring in other regulatory measures and changes in legal codes that would impact predistribution nationally and internationally.

Therefore, low-income and middle income countries (LMICs) today, which cannot achieve what rich countries can through this progressive fiscal strategy alone, necessarily require other elements of a broader strategy. They require greater regulation of financial markets, to prevent misdirection of financial flows to social less desirable activities and to reduce the volatility and fragility created by financial markets. LMICs require sovereign debt concerns to be addressed, much as European countries benefited from the postwar reduction of debt Piketty describes. LMICs require a global legal framework that does not allow intellectual property rights and monopolies over knowledge to prevent equitable distribution of and access to essential products and technologies, so that they too are better equipped to deal with pandemics and climate change. And while all countries require urgent international attention to climate challenges in the form of greater finance for mitigation, adaptation, and loss and damage payments these should be treated as global public investment, rather than as charitable handouts dependent on the whims of increasingly stingy governments in HICs.

Piketty’s proposals for a more feasible and just future for humanity are hugely important. In addition, we need other regulatory measures that would control a global capitalism that is otherwise on course to devour societies and the planet. Finally, one point made in this book may be the most consequential of all: “Economic questions are too important to be left to others. Citizens’ re-appropriation of this knowledge is an essential stage in the battle for equality.”

(Jayati Ghosh can be contacted at jghosh@umass.edu)