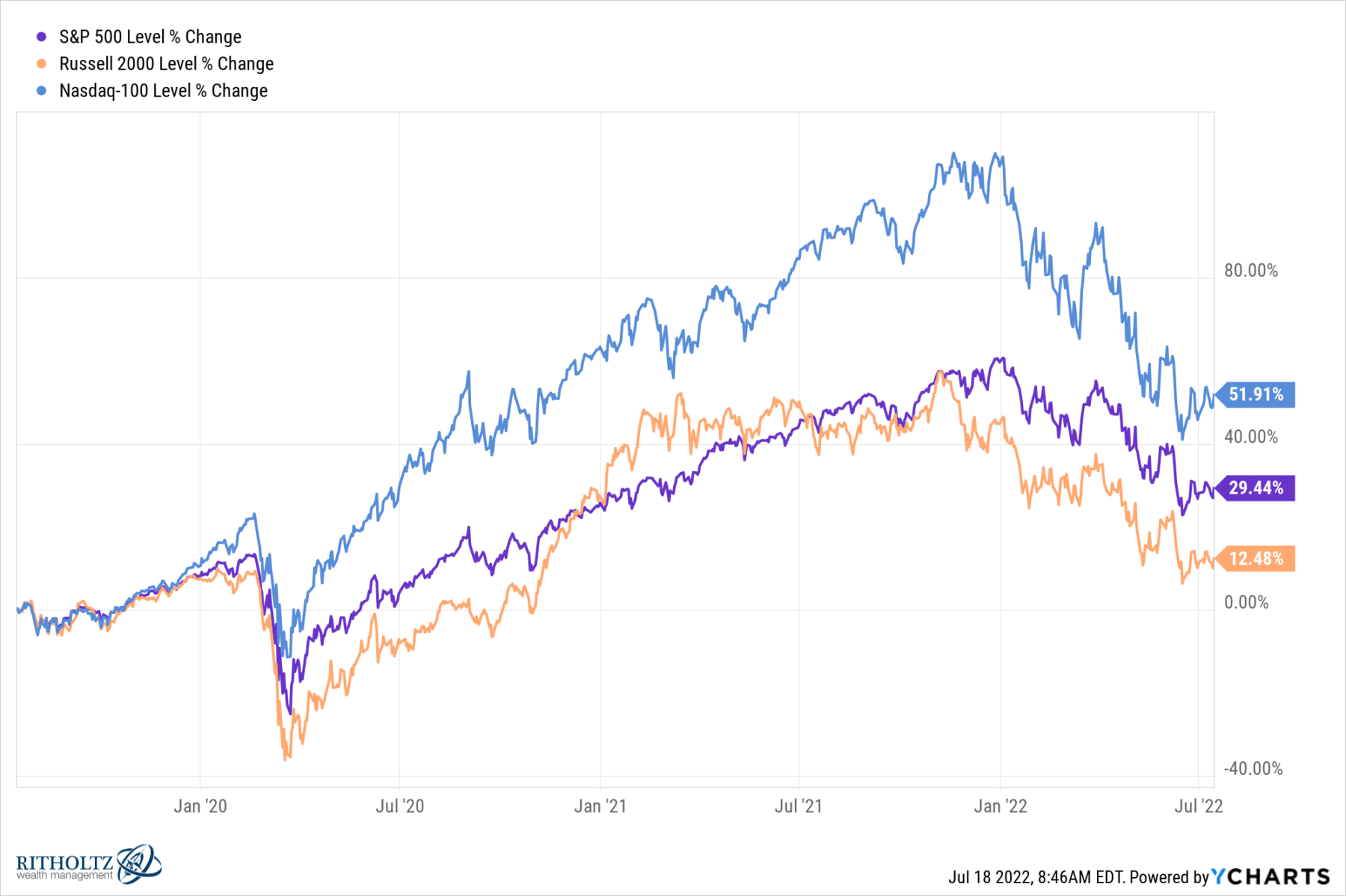 Ignore the emojis in the headline long enough to ask yourself this question: What might the rest of 2022 look like?

I did that exercise last week in response to a client inquiry about the second half of the year. The context was excess cash looking for a good long-term home (not a trade). The question was not so much where to put the capital, but rather when to deploy it. They understood the advantages of lump sum investing, and the psychological benefits of legging in over time; for this chunk of capital, they were looking for an aggressive, well-timed entry point.

Some caveats: RWM does NOT manage billions of client dollars this way; you do NOT want to invest “real” money based on my or anybody else’s gut as to when to jump into the deep end of the pool. It only works for someone whose financial plan is fully funded, the rest of their house is in order, and they are playing with a modest amount of discretionary cash.

Regardless, it is an interesting question.

To answer it requires some imagination as to possible paths the market can take from here. It also requires some self-awareness (and some chutzpah) about what it is you think you know that most of the market has yet to figure out. Throw in some of Howard Marks‘ second-level thinking and you can cobble together an answer with a half-decent chance of success.

Let’s start with how we got here:

A massive global pandemic led to a shutdown of the world’s economy. Enormous government response — most notably $5 trillion in fiscal stimulus from the U.S. — avoided a catastrophic depression but supercharged the economy. This was made worse by A) Shift from services to goods; B) Supply chain disruptions; C) Vaccine hesitancy. D)  Federal Reserve staying at Zero for too long.

Exacerbating matters was this failure to normalize rates in a reasonable time period after the pandemic recovery began. With the benefit of 20-20 hindsight, this likely would have tamped down some of the worst inflation.

But all that stimulus had its impact: 2020 saw markets gain more than 20% as they recovered from a 34% sell-off; 2021 was even better, with markets up 28% and never falling more than 5% from all-time highs the entire year.

Then came 2022, the annus horribilis of this young decade. Some of this was surely mean reversion, but it was a lot of things also: Inflation reached 40-year highs; the Fed began aggressively raising rates, and consumer sentiment hit new lows as recession fears increased.

The market sold off nearly 20% in the first quarter before recovering to about down 5%; 2nd quarter saw a 17% drop. There was no place to hide as bonds fell double digits in the first quarter (they recovered only slightly in Q2). It was the worst start to a year for Treasuries in the modern era. Crypto got demolished by 67%; Work-from-home stocks were punished; even FAANMG stocks fell dramatically. For traders, Energy (Crude, Nat Gas, Gasoline) was one of the few bright spots along with a basket of commodities in the first half of the year.

The decrease in equity markets is fascinating because the recent quarters of reported earnings were at record highs1. This makes the drop over the first half of the year driven not by a decrease in earnings but by a compression of the PE multiple. So far it appears that companies have been able to pass along inflation-driven input costs to consumers.

This leaves us where we are today: Markets seemed to have priced in a mild recession, and peak inflation behind us. I am unsure if the markets have priced in the Fed overtightening, and I am especially concerned about earnings softening a little this quarter (Q2 reporting started last week) and I am not at all sanguine about what Q3 earnings will look like.

The big wildcards: Will a behind-the-curve Fed overreact to inflation that is already falling? How much will the new rate regime impact Q3 earnings? Will the consensus soft landing — a silky, sexy mild recession — morph into something much worse? Lastly, are weak Q3 earnings reflected in stock prices.

I suspect FOMC going 75 bps on July 27-28 pretty much seals the deal for a recession.

Your entry point will be determined by sentiment and how markets are trading at that moment. If you missed last week as your moment, then I’d be looking for a big miss either this during quarters’ reporting season, or much more likely, in Q3 when we find out if the Fed’s overreaction did too much damage.

1. BAML noted this morning: “Weakest start since 1Q20, fewer beats than average Following Week 1, 35 S&P 500 companies (including early reporters) comprising 10% of index earnings have reported. 2Q EPS ticked down by 30bp since July to $55.18 (vs. our $55.35). Just 43% of companies beat on sales and EPS, weaker than the historical postweek 1 average of 47% and the weakest since 1Q20. We expect 2Q EPS to ‘meet’ at best with a flurry of downward revisions”