Today, we are pleased to present a guest contribution written by Ron Alquist (Senior Economist and Policy Advisor, Financial Stability Oversight Council), Benjamin R. Chabot (Knowledge Leader, Federal Reserve Bank of Chicago), and Ram Yamarthy (Senior Economist, Office of Financial Research, U.S. Treasury). The views expressed in this blog post are the authors’ own and do not necessarily represent those of the Financial Stability Oversight Council, the Federal Reserve Bank of Chicago, the Federal Reserve System, the Office of Financial Research, or the U.S. Department of Treasury.

Research in economic development points to institutions that protect property rights as a determinant of long-term income growth. North and Thomas (1973), among others, argue that property rights provide the necessary incentives to accumulate human and physical capital. An equally well-established body of research views financial markets as necessary for economic development. Since at least Schumpeter (1912), economists have argued that well-functioning financial markets improve the allocation of capital and promote growth by reducing transaction costs and information asymmetries.

We link these two ideas in a new paper (Alquist, Chabot, and Yamarthy 2022). Specifically, we examine whether the cost of capital of foreign equities traded on the London Stock Exchange (LSE) in the late 19th century reflected cross-country differences in institutional quality and whether those differences are related to economic growth. The evidence we find is consistent with both ideas, indicating that the quality of institutions influences the pattern of growth, in part, through its effect on risk premia and investment.

The late 19th century is well suited to studying how the international equity market priced the quality of property-rights institutions. During that period, Great Britain invested in a diverse set of countries, including those that did not share a common legal and accounting framework and were not under British colonial control. These investments were long-lived and derived their cash flows from real assets located in foreign countries. Although British citizens managed the investments, the projects outside the Empire were in foreign jurisdictions, creating the risk that contracts were unenforceable because the requisite institutions that protected property rights were weak or absent.

Further, the unique circumstances of that period permit us to investigate whether the risk premium related to weak contract enforcement influenced later growth. In the late 19th century, British overseas investment financed infrastructure projects around the globe, including railways, port facilities, and the mines and plantations that produced primary products for export (see, among others, Clemens and Williamson 2004). By focusing on that period of investment-driven growth, we can test the idea that the quality of the historical institutions shaped the long-run path of development through the effect on investment.

To investigate these questions, we use a data set consisting of 1,808 British and foreign equities from 52 countries traded on the LSE between 1866 and 1907. We collected the price data, quoted in British pounds, from the Friday official lists published in the Money Market Review and the

dividend payments and shares outstanding from the Investor’s Monthly Manual and The Economist. We sampled the stock prices every 28 days between January 1866 and December 1907, which resulted in 13 four-week months per year. The sample consists of 295,440 28-day holding period returns corrected for dividends, stock splits, and special payments. Chabot and Kurz (2010) also use these return data.

Table 1 provides the summary statistics of the firm-level excess returns by country, where we use the 28-day London Banker’s bill rate as the risk-free rate. More than half the firms are British (950), followed by the United States (179), India (80), Argentina (68), Australia (55), and Brazil (50). British firms offered one of the best risk-return tradeoffs. Although expected returns are low in absolute terms, so too is risk, as measured by the standard deviation. Only Argentina and Australia have comparable Sharpe ratios. 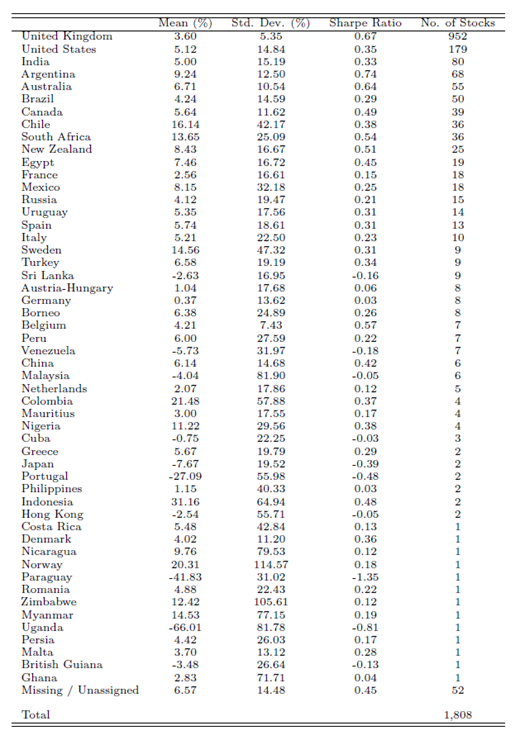 Institutions and the Equity Cost of Capital

Guided by the predictions of a simple two-period portfolio allocation model, we first investigate whether the risk-adjusted cost of capital in the 19thcentury reflected cross-country differences in institutions. We construct common risk factors such as market returns, size, value, and momentum (e.g., Fama and French 1993) using the 19th-century equity return data to perform the risk adjustment. The risk-adjusted cost of capital at the firm level is the constant term or so-called alpha from a time-series regression of the firm’s returns on those factors.

We use two indicators of institutional quality–a dummy variable that captures the country’s predominant legal tradition from La Porta et al. (2008) and the European settler mortality rate during the early settlement period from Acemoglu et al. (2001). For legal origins, the hypothesis is that firms in countries with a British common law tradition pay a lower equity cost of capital. because that tradition provides more robust protections to outside investors. For settler mortality, the idea is that Europeans had less incentive to establish secure property rights and prevent the formation of extractive, investment-retarding institutions in regions with high settler mortality rates. We also include a modern-day index of expropriation risk identical to the one used in Acemoglu et al. (2001).

In the regression analysis, we include only non-European countries. Limiting the sample in this way is consistent with Acemoglu et al. (2001) and La Porta et al. (2008). They examine whether the legal traditions and property-rights institutions that emerged in Europe had spread globally. Omitting non-European countries from the sample reduces the number of equities to about 625 from 1,808 and the number of countries to about 25 from 52. The sample size also varies with the availability of the other data and their overlap with returns.

Table 2 reports the results of the panel regressions, where we regress firm-level alpha onto measures of country-specific institutions. Operating in a country without an English legal tradition or with weak property-rights institutions is associated with a higher firm-level cost of capital, consistent with economic reasoning. A country with a 1% higher settler mortality rate had, on average, a 1.8 percentage point higher annual alpha using the Fama-French adjusted returns. Despite a smaller sample, we obtain comparable results using country-level equity returns. This table reports the asset pricing results obtained by regressing individual firms’ risk-adjusted returns onto country-level measures of institutional quality. Going clockwise, the first panel uses returns adjusted using the British market factor; the next two panels use the three British Fama-French factors and momentum in the third panel; in the final panel, we include the illiquidity factor. The risk adjustment removes time-series variation with the factors and cross-sectional industry fixed effects. The coefficient values from all regressions are annualized and converted to percentage terms. Standard errors and t-statistics account for robust standard errors.

Given this evidence, it is natural to ask whether actual seizures of private property in the late 19th century reduced payoffs to British investors from their foreign investments. Actual expropriations during this period were rare (Lipson 1985), making the idea challenging to test directly.

However, to examine this idea using the available data, we use data on the expropriation of U.S. foreign direct investments (FDI) between 1929 and 2004, which Tomz and Wright (2010) collect. Figure 1 shows the correlation between the historical cost of capital, Acemoglu et al.’s (2001) log settler mortality measure, and FDI expropriations in the 20th century. This evidence supports the idea that country risk premia reflect, in part, the pricing of future expropriations. 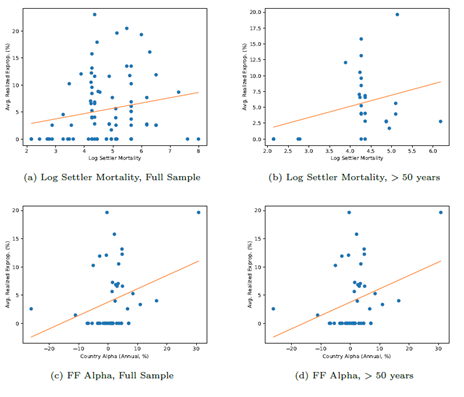 The top two scatter plots depict the relation between average expropriations of U.S. foreign direct investments in the 20th century and log settler mortality (subfigures (a) and (b)). The bottom two plots examine the same relation using country-specific risk-adjusted returns. The total country cost of capital is computed by aggregating risk-adjusted returns that correct for the three Fama-French factors. In each half (top vs. bottom) of the figure, the left subfigure conditions on the full cross-country sample, while the right focuses on countries with foreign direct investment expropriation data for at least 50 years.

Next, we examine whether the cost of capital and the component related to expropriation risk correlates with British foreign investment flows during the late 19th century.

The top panel of Figure 2 depicts the relation between British capital flows and alphas, and the bottom one shows the results using expropriation alpha. In both cases, the correlations are negative, and the statistical evidence in favor of the negative relation becomes stronger when we omit an outlying observation (Indonesia) from the sample. 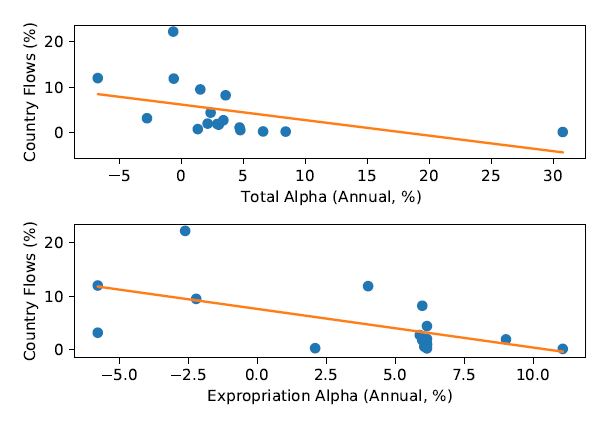 We also investigate the relationship between the 19th-century cost of capital and present-day real GDP per capita. The economic reasoning behind such relies on the premise that institutional quality is a fundamental driver of the historical cost of capital and present-day incomes. In line with this intuition, Figure 3shows the estimated coefficients are all negative and are statistically significant in most cases. 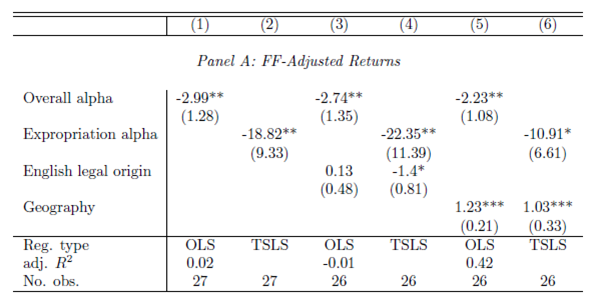 This table reports the results of regressing present-day income per capita levels onto the 19th-century cost of capital, the expropriation component of the cost of capital, the English legal origin dummy, and the index of environmental and geographic variables. This panel uses returns adjusted by the Fama-French three-factors and each column presents a different regression. Across all specifications, the dependent variable is the log of country-specific real GDP per capita in 2016. Column 1 examines the effect of the total cost of capital on present-day income levels. Column 2 replaces the total cost of capital with the expropriation-related component of alpha, based on a TSLS procedure using the European settler mortality measure of expropriation risk. Columns 3 and 4 control for a dummy variable indicating English legal origins. Finally, columns 5 and 6 control for an index of geographic and environmental variables based on temperature, latitude, and distance to coastline. Coefficients on both alpha variables reflect the effects of annualized alpha measures while t-statistics reflect standard errors controlling for heteroskedasticity in residuals.

As Table 3 shows, the estimated coefficient of -2.99 implies that a one percentage point increase in the annualized equity cost of capital is associated with a -2.95% real GDP per capita in 2016. The other estimated coefficients are of a similar magnitude, including when we control for legal origins and other geographic and environmental variables.

The estimated coefficients using the expropriation alpha suggest a 10-20% lower real GDP per capita for each percentage point increase in the risk-adjusted cost of capital. They are, in general, statistically significant at the 10% level.

Property-rights institutions can also shape long-run financial development because they protect investors from expropriation by elites or the government (Acemoglu and Johnson 2005). In a set of regressions not reported here but discussed in the paper, we show that present-day private credit and stock market capitalization ratios correlate with the 19th-century cost of capital and, specifically, the component related to institutional quality and expropriation risk.

We bring unique historical data to bear on whether investors value property-rights institutions and whether the premium related to the pricing of such institutions has implications for economic growth. The evidence broadly supports our hypothesis and is the strongest for the indicators that measure expropriation risk. These findings indicate that the quality of institutions influences the pattern of growth, in part, through its effect on risk premia and investment.