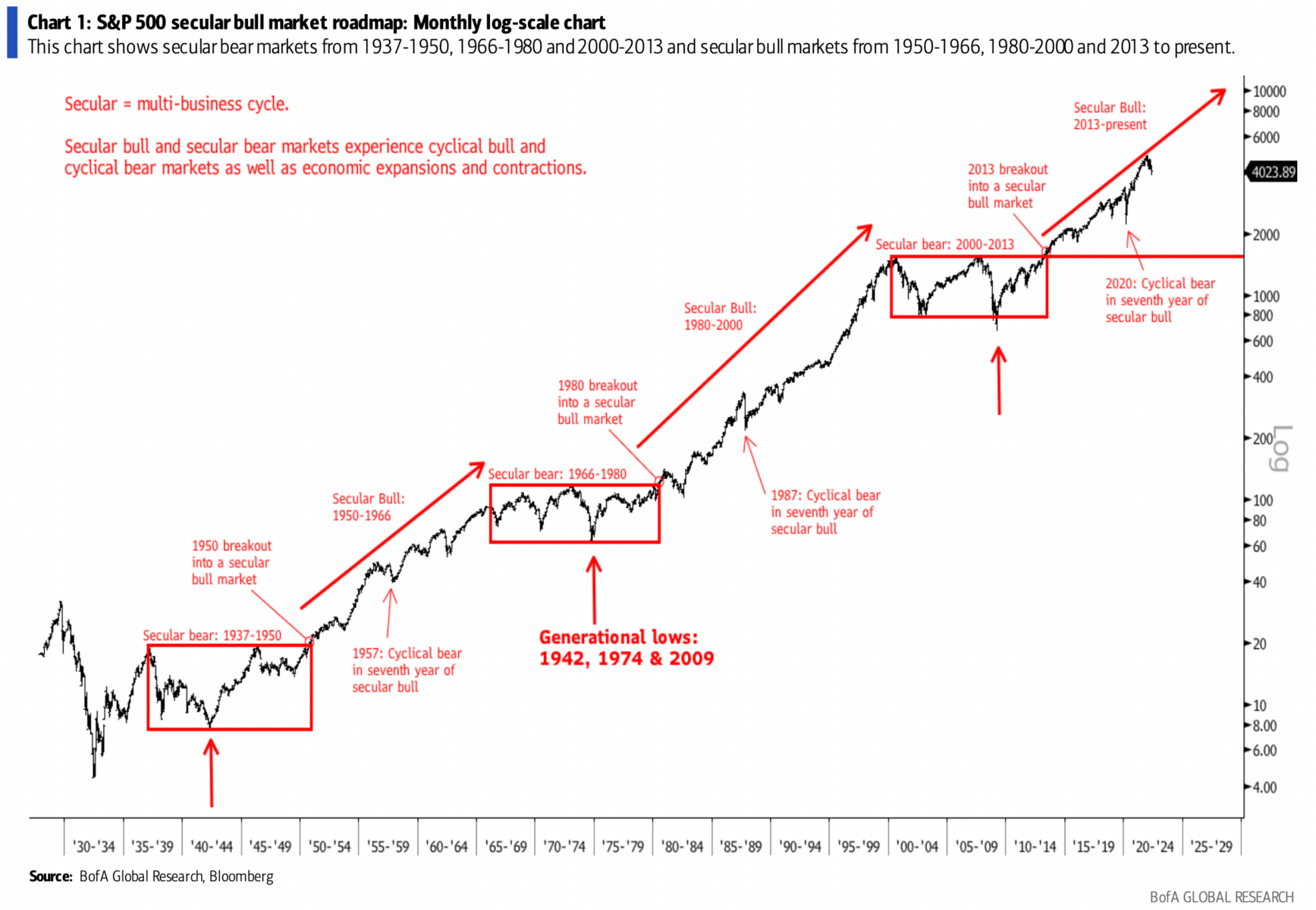 I wanted to say a few words this morning on the differences between secular and cyclical markets. This is more than just a technical distinction followed by a handful of market historians but rather an explanation as to why markets can and do move in such perplexing ways.

A secular market is defined as a broad expansion in the economy, corporate revenues & profits, and technological developments. It typically includes a bevy of new types of employment, with many new products and services offered. A secular expansion touches upon just about every element of society. There are secular bull markets that tend to last anywhere from 15 to 20 years, and secular bear markets that last about half to three-quarters as long.

A cyclical market, on the other hand, can be thought of as a countertrend move (up or down). Cyclical markets tend to be much shorter in duration and depth, and are often confined to a narrower segment of the economy. They include both recessions and expansions, and specific booms and busts of single sectors.

Why are these distinctions so important?

Because they have a substantial impact on the probabilities of expected returns and future market behavior. understanding this can be the key to getting through either type of market in terms of your risk posture and portfolio positioning.

Consider the chart above, courtesy of Stephen Suttmeier of Bank America Merrill Lynch. It shows three distinct secular bull markets – the post-war era (1950-1966); the late 20th-century era (1982-2000), and the current expansion (2013-?). All three of those years can be defined by the dramatic technological and economic growth of each.

It’s also worth noting that during secular bull markets, sentiment tends to be positive as manifested by an increased willingness to spend more and more on each dollar of earnings (multiple expansion). During secular bear markets, the opposite occurs with a decreased willingness to pay for each dollar of earnings (multiple contractions).

Research from Fidelity (2013) noted the specifics of secular markets:

None of these are hard and fast rules, as no two eras are identical. But generally speaking, we can recognize some commonalities as to what drives economies and the markets across various eras.

The current era is driven by a variety of new technologies ranging from Apps to AI to big data to materials science and non-carbon energy, mRNA, and biotech. These appear to be narrower than prior cycles (commercial aviation or electronics) but with just as large ramifications. There are also a variety of wild cards including partisan polarization, social media, and global geopolitics. Any one of these could have an outsized impact that challenges the secular market.

Based on our admittedly small sample set of 20th-century markets, this suggests the current drawdown is a traditional cyclical pullback, a countertrend sell-off likely to last months or quarters (but not years or decades). Looking at history through this lens also implies we are about 2/3 of the way through a secular bull market that began in 2013 and could run another 5-7 years or so.

Since we don’t know what the future holds, it is useful to lean towards probabilities. My study of market history suggests that it is probable that this cyclical bear market will end later this year, and the secular bull market will reassert its uptrend.