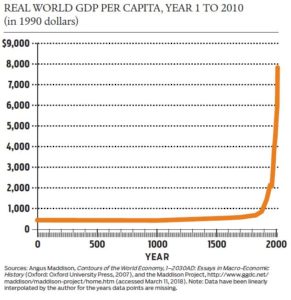 People are often tempted to see social (including economic and political) phenomena in terms of a “swing of the pendulum.” In this perspective, problems such as wokism (just to give an example) will be corrected when the pendulum swings back. I suggest that this approach is easily misleading and seldom useful.

The first question to ask relates to the period of the hypothesized fluctuations, that is, how much time it takes for the pendulum to come back; a short period or a long period correspond respectively to a short cycle and a long cycle.

Consider regular or random fluctuations around a long-term trend. If these short-run fluctuations show some regularity—like, perhaps, the consumers’ preferred car colors—the pendulum analogy may be good, provided we keep in mind that it is just an analogy. But if the short-run fluctuations are random or irregular, that is, impossible to reliably predict, the analogy is faulty. Short-run fluctuations of stock prices, for example, cannot be likened to a pendulum swing. In social matters, many, perhaps most, short-run fluctuations seem to be random or at least irregular. If they were regular, they would be arbitraged away, which means that individual responses would dampen them: if I know that wokism is just a short-run phenomenon, I will feel less obliged to follow; if many individuals think that the price of a stock will increase tomorrow, it will not because it will have increased before. The model of short pendulum swings is thus not very useful for understanding society.

Can we can identify longer pendulum swings (around which short-run fluctuations may happen)? Most likely not. For an extreme illustration, no long cycle to be found in the evolution of world GDP per capita (see the chart below from my post “Individualism and Western civilization”). Similarly, liberty and tyranny have not swung back and forth like a pendulum during the history of mankind: tyranny has been nearly universal while individual liberty has been a rare, limited, and mostly recent event. Even more modest long cycles are difficult to find: for example, the 50- or 60-year Kondratieff economic cycles have no micro-economic foundation and are not supported by empirical existence (see S.N. Solomou’s “Kondratieff Cycles” in the New Palgrave Dictionary of Economics). The beaver hat fashion of the 17th and 18th centuries may never come back. Of course, history is not finished and our descendants in thousands or millions of years may discover long cycles of commodity prices, wealth and poverty, liberty and tyranny, peace and war; but then they may not.

The hypothesis of pendulum-like cycles is suspect for another reason. It goes back to the archaic myth of the eternal return: in many primitive religions and beliefs, everything moves in cycles, from the ordinary year to the renewed creation and destruction of the universe. This myth influenced some doctrines of the ancient world such as Stoicism and Neo-Pythagoricism. (See The Myth of the Eternal Return by the historian of religions Mircea Eliade—1949 for the original French version; 1965 for the second printing of the English translation.) Note that there is no eternal return in Christianity: the end of the world happens only once.

A rational theory of pendulum swings in social affairs exists even less for long cycles than for short ones. Any attempt to build such a theory would get us bogged down in methodological problems. One is the unsupported hypothesis that history follows immutable laws of development that would allow predictions (see Karl Popper, “The Poverty of Historicism,” Economica 11:2-3 and 12:2 [1944-1945]). Another problem is scientism, the naïve application to social sciences of the concepts and methods of the natural sciences, as denounced by F.A. Hayek (see his The Counter-Revolution of Science [1952]).

It is safe to conclude that the pendulum intuition does not help explain social phenomena. A social pendulum is a bad analogy.