My back to work morning WFH reads:

• March 2020: How the Fed Averted Economic Disaster As markets plunged, Jerome Powell and his colleagues vastly expanded the reach of the central bank, with implications that will be felt for years to come. (Wall Street Journal)

• The Mystery of the Declining U.S. Birth Rate The U.S. birth rate has fallen by 20% since 2007. This decline cannot be explained by demographic, economic, or policy changes.  (Econofact)

• Tesla Now Runs the Most Productive Auto Factory in America Elon Musk’s California plant cranked out more cars than 70 competing facilities in North America. His next factories are even bigger. (Bloomberg)

• Does China think long-term while America thinks short-term? It’s far from clear that Chinese leaders engage in more long-term thinking than American leaders do. There are plenty of examples to show this. (Noahpinion)

• You can now see how many Uber drivers liked (or hated) you Uber drivers have been rating riders for years. A new option in the app lets everyone see how many one-star ratings they’ve received. (Washington Post)

• Cancer isn’t one disease, it’s 200. Biden’s revised Cancer Moonshot reflects that. The president wants to cut cancer deaths in half within a quarter-century. (Grid)

• In the thriller ‘Severance,’ Adam Scott’s humanity hangs in the (work-life) balance Make no mistake: That lengthy tracking shot near the top of the first episode of Severance, Apple TV+’s darkly funny, hugely imaginative corporate-thriller series, is all about swagger. That slow-burn start is all about Severance (and creator Dan Erickson, and director Ben Stiller) confidently calling its shot, saying: We’re going somewhere, somewhere specific and stylized. We may take our time getting there, but if you hang with us, it’ll be worth it. (NPR)

Be sure to check out our Masters in Business this week with Samantha McLemore, Miller Value Partners. She is the co-portfolio manager of the Miller Opportunity Trust and related strategies, and founder/CIO of Patient Capital Management. For the 10 years ending 1/31/22, LMNOX returned 16.42% annually and was in the top 1% of its Mid-Cap category.

Used Car Prices Are Through The Roof 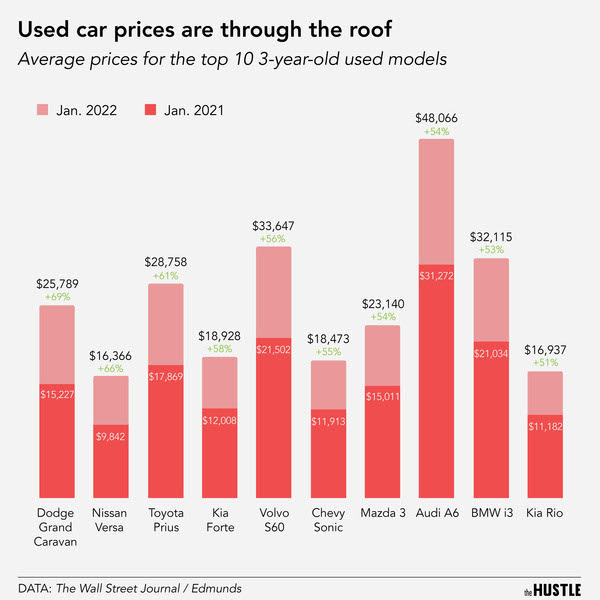