1. Redeploy some of its ground forces away from the Ukrainian border—at least temporarily—if negotiations are successful but continue to aid pro-Russian rebels in Eastern Ukraine.

2. Send conventional Russian troops into the breakaway regions of Donetsk and Luhansk as unilateral “peacekeepers” and refuse to withdraw them until peace talks end successfully and Kiev agrees to implement the Minsk Accords.

3. Seize Ukrainian territory as far west as the Dnepr River to use as a bargaining chip or incorporate this new territory fully into the Russian Federation. This option is represented in Figure 2a.

4. Seize Ukrainian territory up to the Dnepr River and seize an additional belt of land (to include Odessa) that connects Russian territory with the breakaway Transdniestria Republic and separates Ukraine from any access to the Black Sea. The Kremlin would incorporate these new lands into Russia and ensure that the rump Ukrainian statelet remains economically unviable.

5. Seize only a belt of land between Russia and Transdniestria (including Mariupol, Kherson, and Odessa) to secure freshwater supplies for Crimea and block Ukraine’s access to the sea, while avoiding major combat over Kiev and Kharkiv. This option is represented in Figure 2b.

6. Seize all of Ukraine and, with Belarus, announce the formation of a new tripartite Slavic union of Great, Little, and White Russians (Russians, Ukrainians, and Belarusians). This option would involve operations represented in Figure 2a as “phase one,” with Figure 2c representing “phase two” of this option.

Here are the relevant maps. 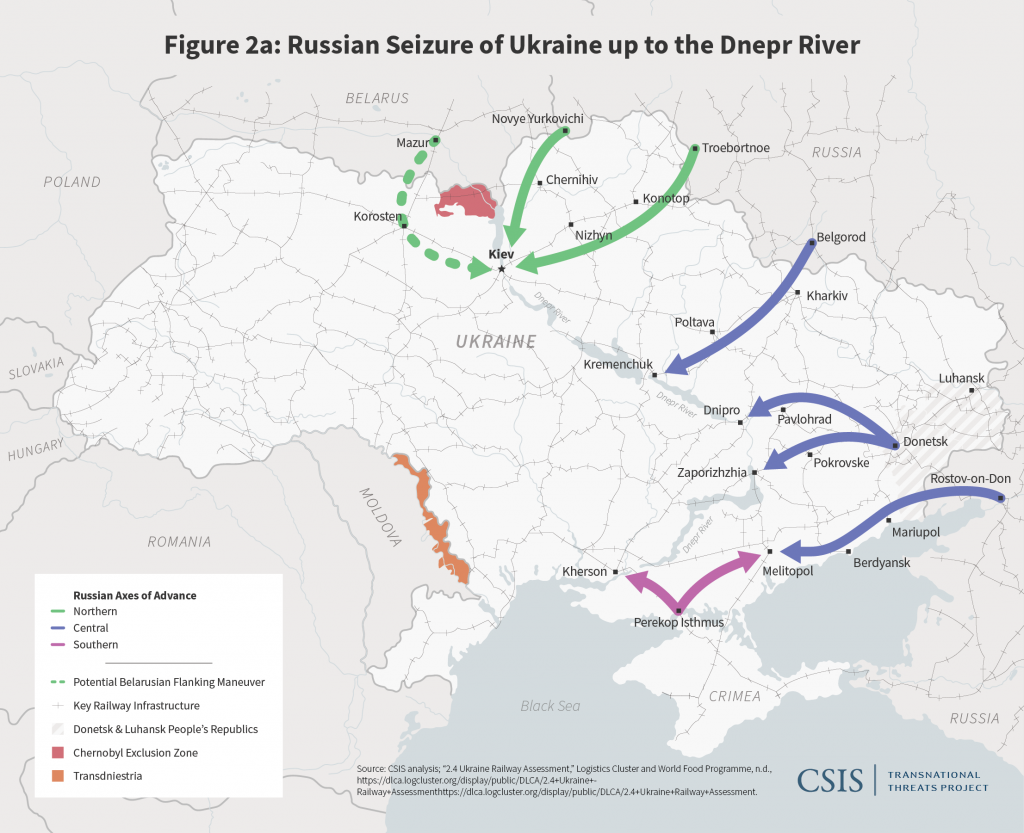 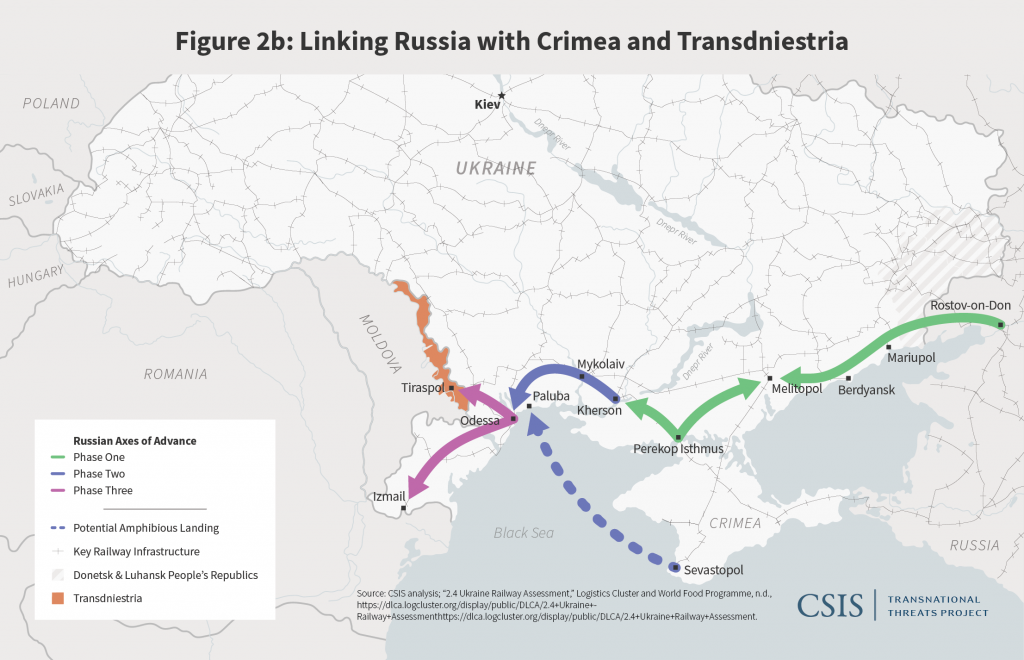 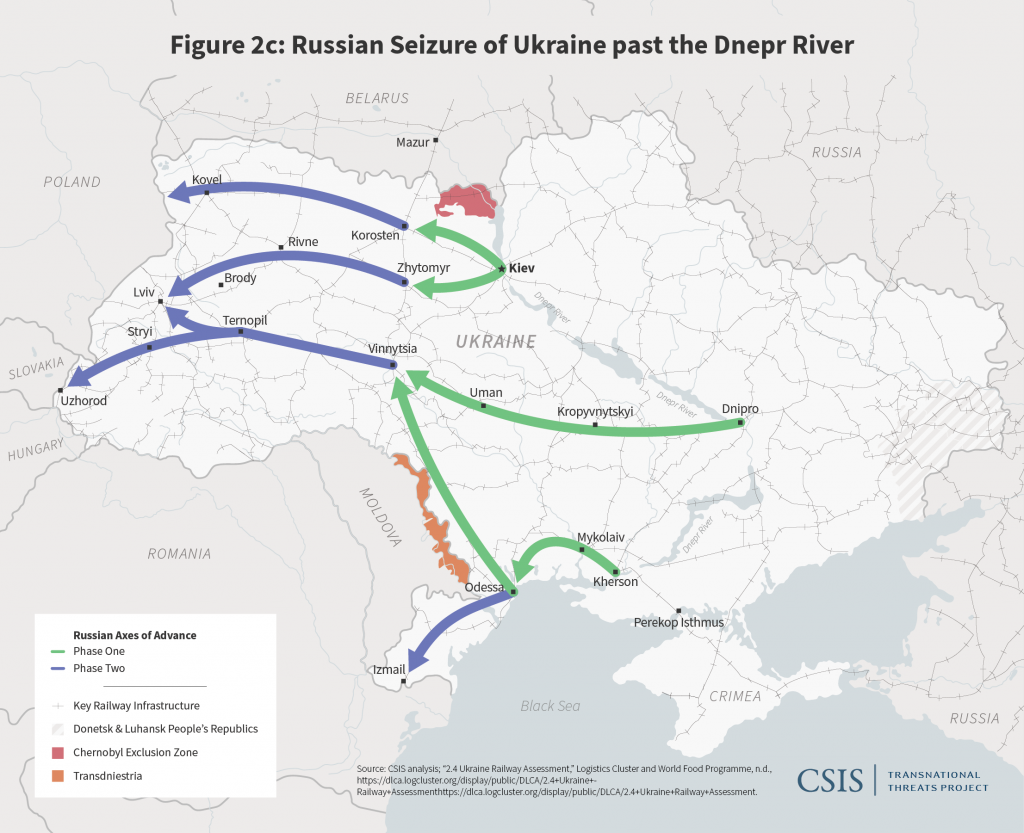 This analysis was from January 14th, which predated the increased number of forces in Belarus, and (of course) recent movements of units to battle positions. Here is a schematic (i.e., no real depiction of unit type – mech infantry vs. armor vs. arty) depiction of Russian force disposition. From CNN: 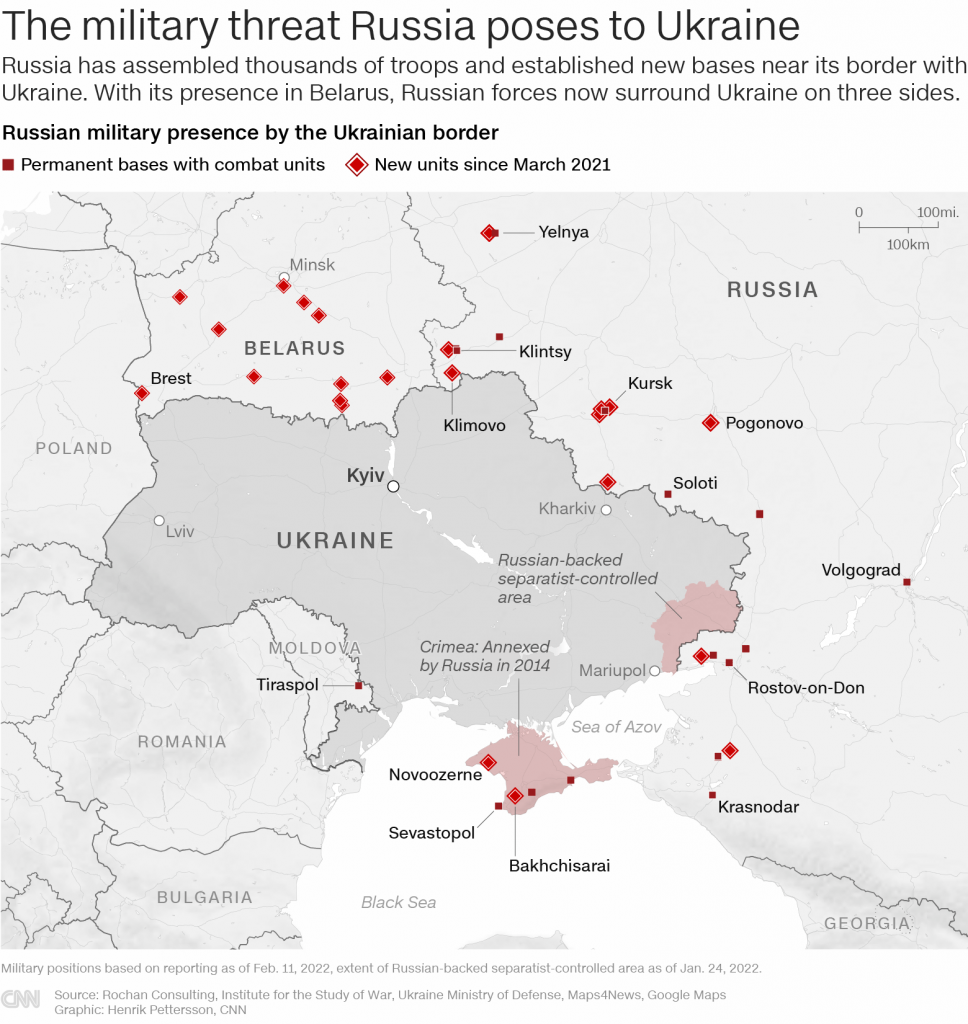 The extent and nature of US and allied response clearly depends on the path taken by the Russians. The impact on the Russian and world economy is thus contingent. Wells Fargo takes a pretty sanguine view:

In our view, global economic growth is not at risk should Russia and Ukraine enter recession as a result of conflict and/or international sanctions. However, oil prices could move higher as a result of Russia supply disruptions, which could weigh on purchasing power and result in energy shortages, particularly within the European Union. Oil prices are a key influence for Russia, and current supply/demand dynamics suggest oil prices could move higher, especially if sanctions are imposed on Russia. Should oil prices remain steady or move higher, we believe the Russian economy and local financial markets will be more protected relative to 2014 even if sanctions are imposed, while the ruble selloff will likely be more contained.

Russian real GDP shrunk in 2014, partly due to sanctions, partly due to oil prices falling. Right now oil prices are rising, and prospects are for continued elevated prices given continued global recovery – and oil (and natural gas)  is pretty much all Russia exports.

Still, it doesn’t take a lot of movement in growth to derail oil prices (given the price inelasticity of demand for oil), so I wouldn’t bet too much on this trend (even if it’s a reasonable base case scenario).

The Russian currency is already under pressure (see this post), the stock market is down nearly 20% since mid-October, y/y inflation in January is 8.73% – on par with what it was on the even of the 2014 invasion. Finally, Q3 q/q growth rate was -0.8% (not annualized). That’s the context to consider what might end up being the “mother of all sanctions“: