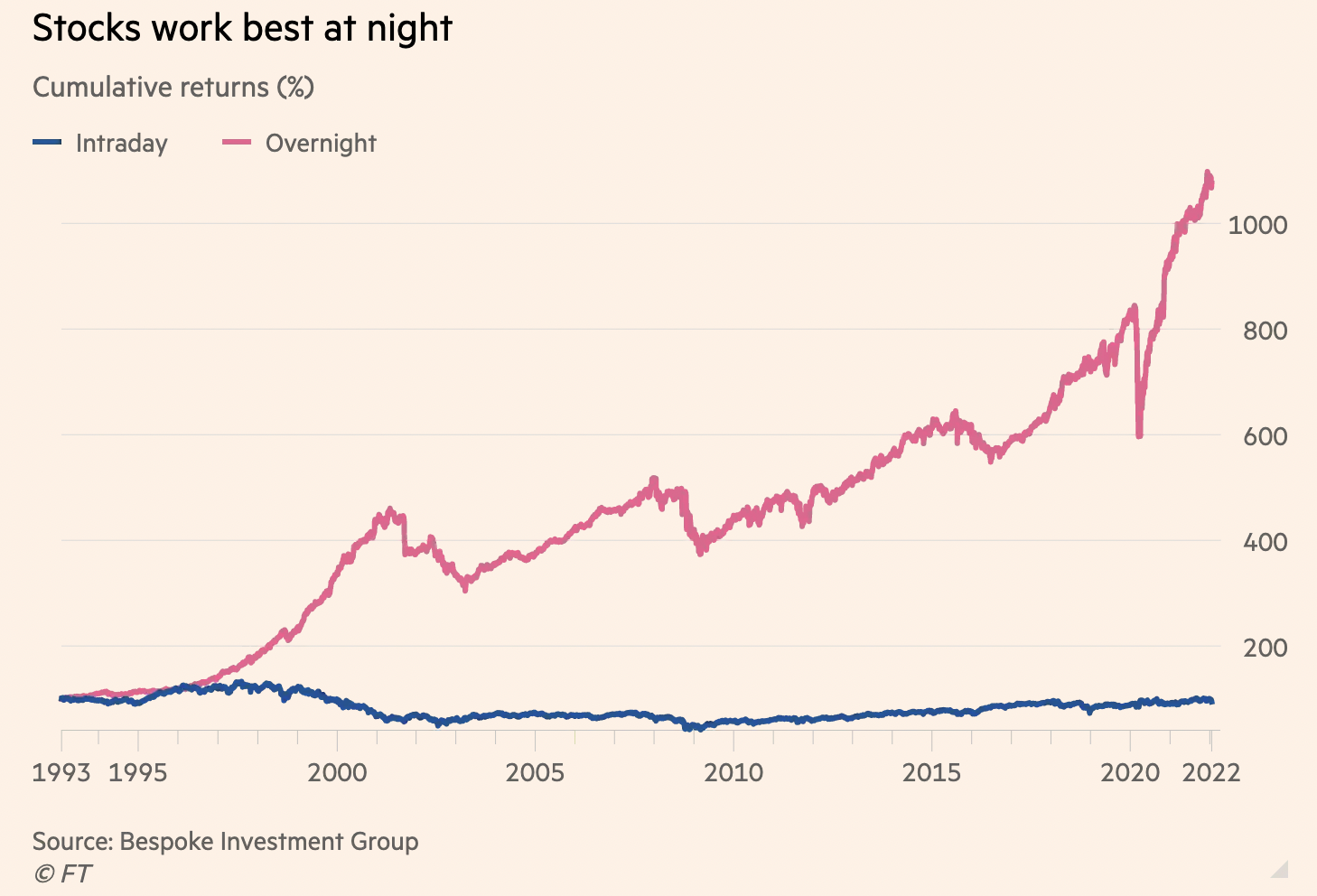 I used to work on a trading desk. It was during the 1990s, in the middle of an amazing tech boom. I had two money lines, an intraday trading limit, and the capital I could carry overnight (or longer). The overnight P&L invariably outperformed intraday, which is why the firm tolerated me tying up that capital. But the inversely correlated result of greater activity stood inapposite of what the prop desk historically believed. That outperformance sent me down the rabbit hole of behavioral finance; it also explains my preference for indexing and mostly passive portfolios.

The intraday vs overnight gains question popped up again recently. Bruce Knuteson, a former DE Shaw quant and ex-particle physicist/MIT prof, has floated the theory that quant hedge funds are manipulating prices in the thinly traded after-hours markets to make their fund’s performance appear better than it actually is.

Maybe — but probably not. A detailed FT column by Robin Wigglesworth does a good job explaining the counter-arguments; Michael and Ben have fun discussing it on Animal Spirits this week. I am going to add a little color to the discussions.

Wigglesworth (MiB here) recounts the persuasive research that had debunked the conspiratorial nature of this: I find two of those explanations compelling: 1) markets are closed four times as long as they are open (+ weekends + holidays), so naturally in the fullness of time that larger subset should have many times the gains of the smaller (market hours) subset. Note too that earnings reports and other market-moving news gets released pre or post-market hours, so adjustments take place when the market is closed. Given the art of earnings management and the high percentage of quarterly beats, this is also no surprise.

But there is another factor that might be getting overlooked in this debate: Market hours are when the professionals must get it done. Positions get squared up, Cash gets moved about, Syndicate trades are executed, Trade errors are fixed, Portfolios are rebalanced, Secondaries, IPOs, SPACs are floated, Bond offerings are sold. All of this takes place during market hours. Institutions are both buyers and sellers during the day. They are deeply knowledgeable, have an enormous amount of capital, insightful information flow, and have professionalized the business of trading stocks, bonds, options, etc.

Much of what takes place between 9:30 AM and 4:00 PM is about the “business of stocks” and not necessarily about the business of investing. Daytime trading is when all of that “blocking and tackling” takes place – valuations or long-term performance are not very relevant to those executions.

You and I buy stocks during the day because a) that is when markets are opened, and b) we expect prices to rise over years and decades; we don’t buy because we expect a higher print by 4 pm.

There are other issues here as well: I am generally skeptical about conspiracy theories because people are pretty terrible at keeping secrets. LIBOR was manipulated, we found out; Enron’s books were cooked, we found out; mutual fund trading scam was an example that was found out pretty quickly. Look how much has come out about January 6th — information keeps bubbling up, and from people with the knowhow and motives to keep it quiet. Ryan Holiday (MiB here) explains in his book Conspiracy how just 2 people could not keep a secret about something as modest as funding Hulk Hogan’s litigation vs Gawker media.

I never want to discount the possibility of fraud or manipulation, it happens all the time on Wall Street. However, decades of after-hours 0utperformance due to coordinated after-hours trading? That is a very long time for such blatantly illegal activity to go on undetected. Until we see some hard evidence, I have to dismiss it as a weak theory contradicted by much better explanations.

MiB: Robin Wigglesworth on the Rise of Indexing (November 13, 2021)