Today, we are pleased to present a guest contribution by Steven Kamin (AEI), formerly Director of the Division of International Finance at the Federal Reserve Board. The views presented represent those of the authors, and not necessarily those of the institutions the authors are affiliated with.

This week’s FOMC meeting confirmed, if confirmation was even needed, that U.S. monetary policy is about to begin its tightening cycle.  As Chair Powell noted in his press conference, the U.S. economy can no doubt handle this tightening: the economic recovery is going strong, household and firm balance sheets are solid, and the Fed is prepared to adjust its policy if circumstances change.  But for emerging market economies (EMEs), the spillovers of rising U.S. interest rates pose a more dire threat.   Many EMEs suffer from fragile public finances, precarious access to international capital markets, and prior history of defaults.  These vulnerabilities have been exacerbated by lower growth prospects and higher debt in the wake of the global pandemic recession.  Higher interest rates make it more costly to service higher debt levels and discourage investors from financing these payments.

Moreover, the reason for the rise in U.S. rates matters.   A rise in interest rates driven by favorable U.S. growth prospects would likely be relatively benign, since the benefits of higher exports to the United States and stronger investor confidence would help offset the costs of higher rates.  But the heightened prospects for monetary tightening this year are being driven instead by a hawkish pivot in Fed policy as it confronts much higher inflation than it had earlier expected.  And research I’ve undertaken with two of my colleagues at the Fed, Jasper Hoek and Emre Yoldas,  confirms that when higher rates are driven by worries about inflation and/or changes in Fed strategy, spillovers to EMEs are more disruptive.

To identify this effect, we looked at changes in U.S. Treasury yields following meetings of the Federal Open Market Committee (FOMC).  We classified its announcements according to whether they primarily conveyed “growth” news (i.e., information about future growth prospects) or “monetary” news (i.e., information about future inflation or the Fed’s reaction function), based on the reaction of the S&P 500 equity index.  FOMC announcements were categorized as conveying primarily growth news if the Treasury yield and the S&P 500 index moved in the same direction.  For example, an FOMC communication that increased investor confidence about U.S. growth might cause both U.S. Treasury yields and stock prices to rise.  Conversely, we classified FOMC meetings as conveying primarily monetary news if yields and equities move in opposite directions.  For example, an FOMC announcement referencing rising inflationary pressure might cause yields to rise and the S&P index to fall as higher discount rates weigh on stock valuations.

With this classification in hand, we then estimated how asset prices in 22 emerging markets over the past decade responded to movements in U.S. Treasury yields.  The results are shown in the figure below, which indicates the effect of a 100 basis-point rise in the 10-year Treasury yield, following an FOMC meeting, on EME asset prices.  It is clear that increases in interest rates driven by growth news are much less disruptive for emerging markets than increases driven by monetary news.  In response to growth news, currencies appreciate (a rise indicates depreciation), equities rise, CDS spreads are unchanged, and bond yields move up only moderately.  Conversely, in response to monetary news, all of these asset prices move sharply and adversely. 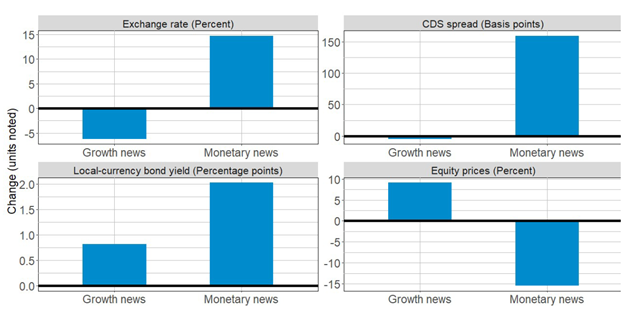 Returning from these econometric results to the real world, it seems safe to say that the heightened expectations for monetary tightening in recent months represent a monetary shock rather than a growth shock: Since early December, the 10-year yield has risen from about 1.5 percent to 1.8 percent, while the S&P 500 has fallen about 7 percent.  This is not good news for EMEs.

Curiously, despite the churning in U.S. markets, credit spreads for EMEs have barely budged.  As indicated in the chart below, they remain near their pre-pandemic levels.

So what gives?  The short answer is: no one I’ve talked with seems to know.  One possibility is that although the rise in U.S. yields reflects a monetary shock, it’s a pretty small one – 10-year yields of 1.8 percent are still super-low by historical standards.  Another possibility is that because U.S. households, firms, and banks are in good financial shape, they are less likely to run from riskier investments like EMEs in response to higher rates—indeed, U.S. corporate bond spreads have remained similarly dormant.  Finally, maybe bond investors are simply asleep at the wheel (that happens!), and the run on EMEs will start when they wake up.