The Bureau of Economic Analysis announced today that seasonally adjusted U.S. real GDP grew at a 6.9% annual rate in the fourth quarter, more than twice the average growth rate the U.S. has seen since World War II. 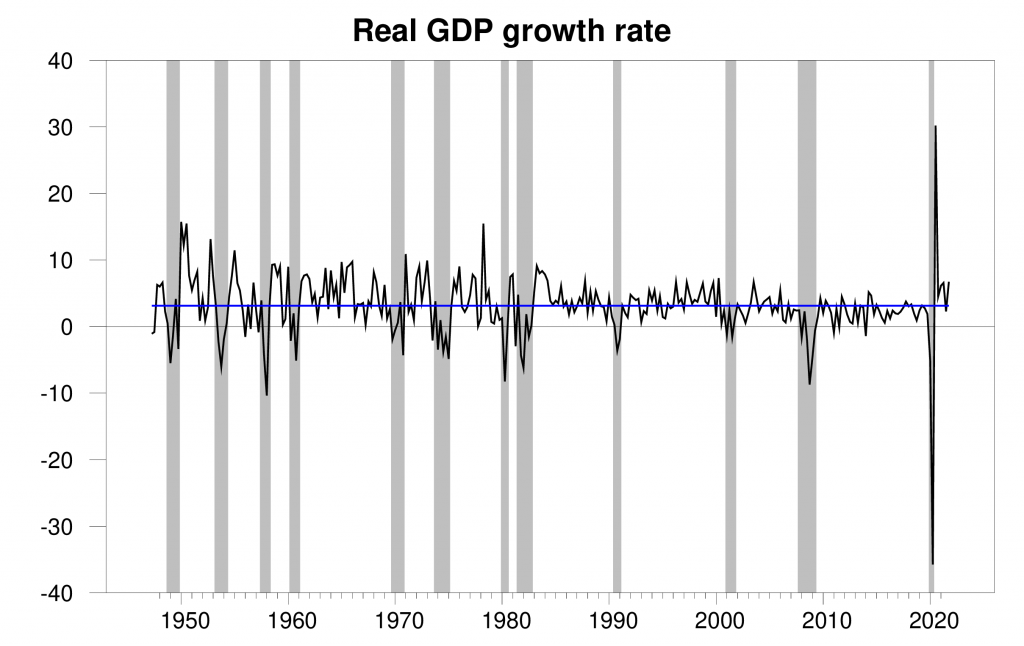 Real GDP growth at an annual rate, 1947:Q2-2021:Q4, with the historical average (3.1%) in blue. Calculated as 400 times the difference in the natural log of GDP from the previous quarter.

The new data put the Econbrowser recession indicator index at 1.2%, historically a very low value and signalling an unambiguous continuation of the economic expansion. The number posted today (1.2%) is an assessment of the situation of the economy in the previous quarter (namely 2021:Q3). We use the one-quarter lag to allow for data revisions and to gain better precision. This index provides the basis for an automatic procedure that we have been implementing for 15 years for assigning dates for the first and last quarters of economic recessions. As we announced a year ago, the COVID recession ended in the second quarter of 2020. The NBER Business Cycle Dating Committee subsequently made the same announcement in July. 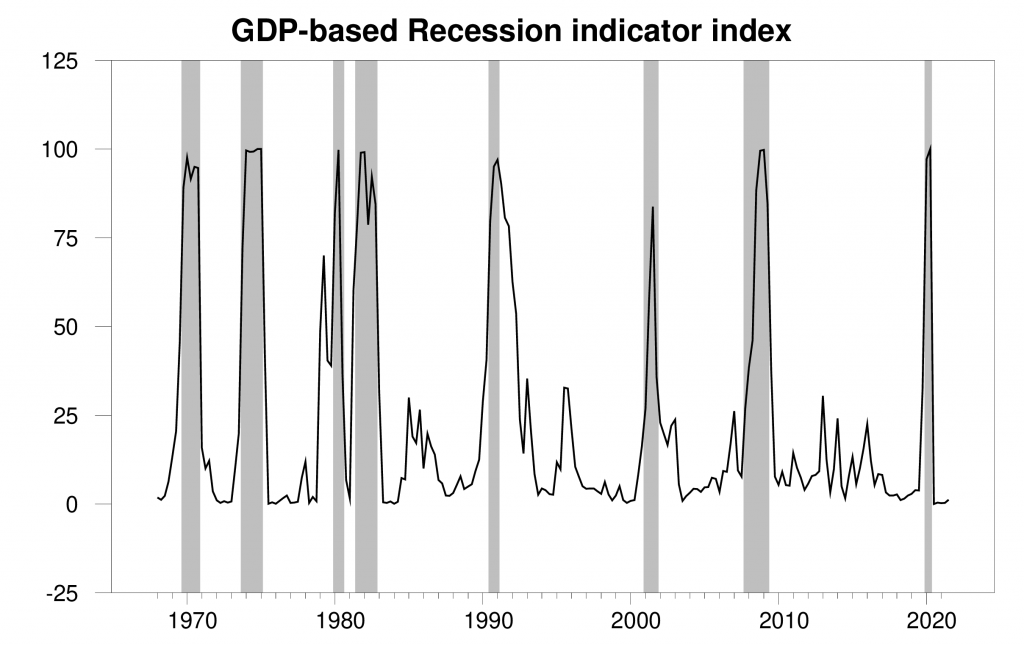 GDP-based recession indicator index. The plotted value for each date is based solely on the GDP numbers that were publicly available as of one quarter after the indicated date, with 2021:Q3 the last date shown on the graph. Shaded regions represent the NBER’s dates for recessions, which dates were not used in any way in constructing the index.

This puts the level of GDP 3% higher than it was at the end of 2019 before the recession. Since then we’ve seen some growth of the population and capital stock along with improvements in technology, so we’d hope to do more than just get back to where we were in 2019. According to the Congressional Budget Office estimate of potential GDP, we’re still half a percent below where we’d expect to be based on long-run factors if there had been no recession. But we’re getting there. 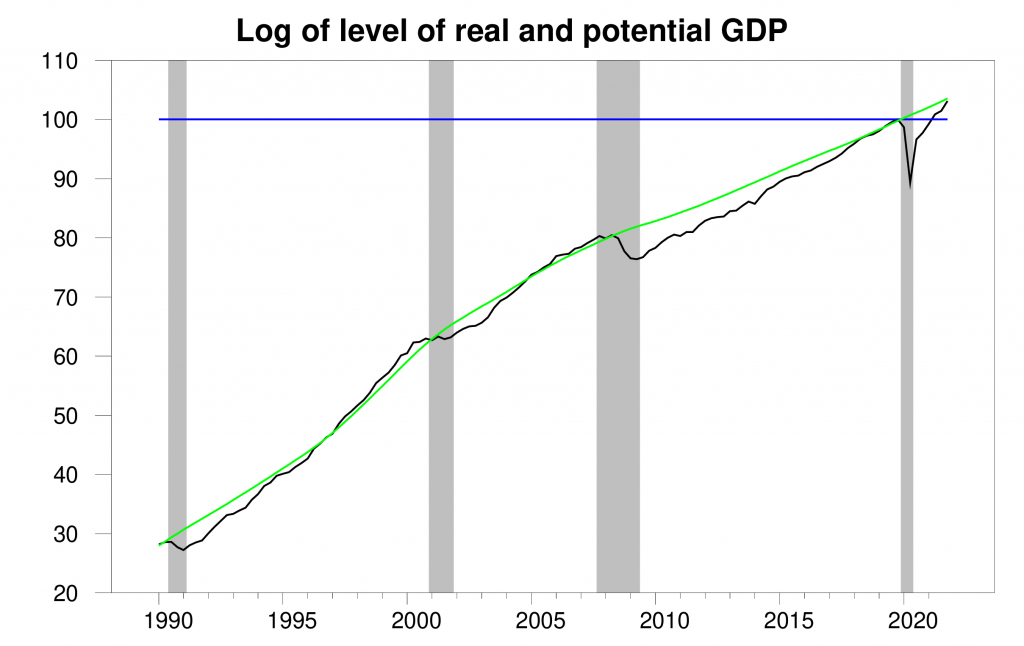 Increases in inventories accounted for more than 2/3 of the quarter’s growth in GDP. Under some circumstances that could be a bad sign, if consumers and businesses had stopped buying and unsold goods were piling up on shelves. 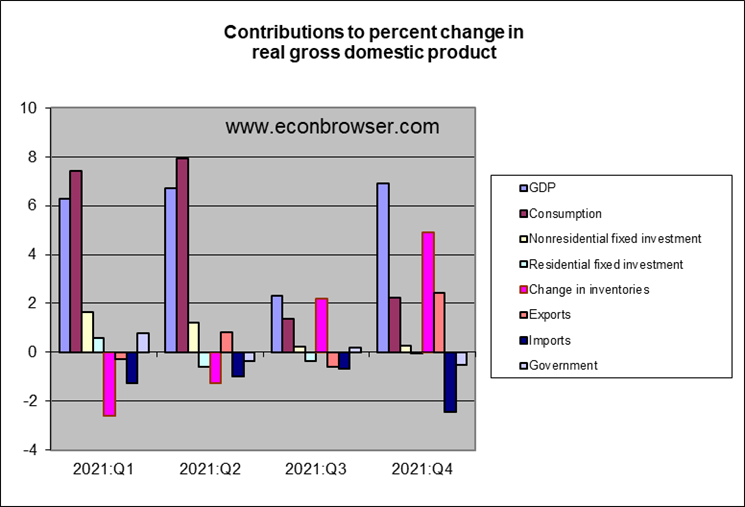 But that’s not what’s going on right now. Supply disruptions associated with COVID-19 brought inventories of many items like automobiles well below normal. The inventory rebuild is an expected result as we start to solve some of those problems on the supply side and is a positive indicator of real growth. And I think there is more to come. Problems with chip supplies have still been holding auto inventories back from where they hopefully soon will be. When that happens, it would bring another boost to future GDP growth.

It’s also surprising that we haven’t seen more of a boost to new home construction (“residential fixed investment” in turquoise on the previous graph) with the real estate market as hot as it’s been. Supply issues may have played some role in holding housing construction back as well.

Bottom line: we can expect faster-than-normal growth to continue even as GDP starts to move above the CBO estimate of potential.